When I was building the gray panhead I found a stubby Santee kick stand that I wanted to use,
but of course Pat and I couldn't leave it alone and tried a little hack, drill & tap mod that didn't work out which ended with a snapped off square bit and the bike almost went down before it was ridden.
I don't really remember how it was disposed of but most likely it went in the dumpster at the shop?
A couple of weeks ago(& nearly a year after the bikes been completed) I make my monthly stop at the somewhat near-by surplus yard. I walk in and immediately spy a kickstand which is pretty odd because they never have anything MC related, as I get close I realize that's MY kickstand!
I was there again two days back and the kickstand is still sitting there & it's kind of weirding me out. 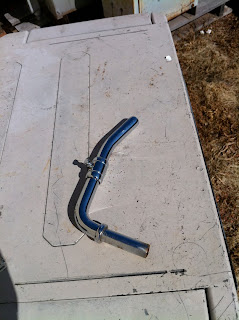