Well It's Been A Full Year.

One year ago Larson dropped off his Triumph for a simple front end update.
He showed up with an idea, an incomplete HD front end, A brand new Sportster wheel, which he thought was a mini drum hub.
We mocked up the stance and made a parts list & a plan. 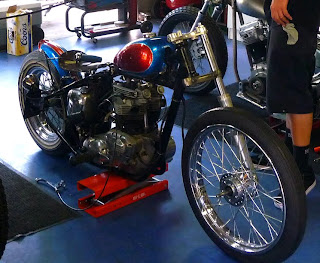 Then in January Bob & I were bored so we spent the day lowering the stock forks, narrowed some drag bars, zip tied a boat light on & sent some photos to Larson.
A month later he traded the front wheel for a pipe kit, we made up a parts list & a plan. 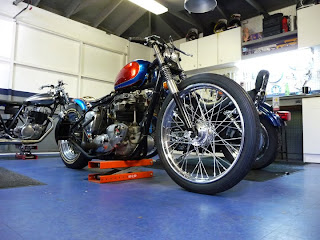 I shot this photo a few minuets ago.

I've offered to buy it.
I even promised to get it done and off to a good home where someone would enjoy and actually ride the bike.
At this point I'm guessing someday it will get picked up as is and moved to another destination where it will also just sit in it's incomplete state.
**
???
Posted by BCM at 10:25 AM

Bikes that never get done are the worst. I hope it gets out there again.

if its still there in a few months, I'll just load it up into the moving truck for NYC.