There seems to be a lot of horrible looking/unsafe "chopper" handlebars out there. I'm not talking about the nostalgic set of pulled back rabbit ears that came on your buddies pre unit survivor. I'm thinking the 16 piece bars that are being bolted up on that XS650, Evo sporty or way worse that super lucky freshened up Knucklehead find.
Without pointing any fingers or naming names I thought it might be best to learn a little lesson from one of the many historically lame aspects of BMX, Handlebars.
****
***
**
*
These first two photo sets are some of the worst of the worst from over the years both in style and safety.
There's a lot of them.
A snapped off bar end stuck in some one's neck is not a fun afternoon let alone it happening on the tarmac at 75mph.
Hopefully the style speaks for itself.
*
** 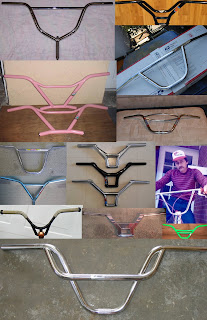 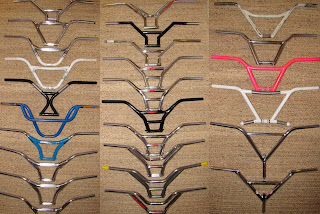 The Grand Pooh-Bah of the Bad BMX bars.
The Big Gulp bar. 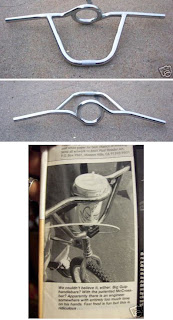 This has been an issue in the BMX world but over the years there has also been those have to have bars that feel great, last and look good doing it. these are mine and many many others favorites.
1. Redline V-bars, the first bar to set the standard, late 70's early 80's.
2. GT BMX pro bar, 4130 Cro-Mo, 8"-28' width, flat bend. These changed everything, well at least in my neighborhood.
3. Redline Forklifter bars, smaller than the GT bars, a little more pull back, different wall thickness in the tubes that mattered, Strong as hell.
4. S&M Slam Bars, after all the ridiculous multi piece bars of the 80's Chris Moellers straight forward 2 piece bar took charge and made it's way onto every racers bike, sponsored or not just change up the stickers. A ton of street and Freestyle bikes swore by them as well. The Slam Bar still holds it own today.
5. Number five is one of my personal favorites, Hoffman bikes patriot bar which I think Taj had a lot to do with and kind of made up for the 1" love handle bars which very much hold down a spot in the first two photos. Similar to the Redline forklifter. They just felt good on my bike.
6. McGoo added Star bars to the top list & I agree they were great I had a set in 82, the star laid back seat post was quality as well, however Star Co was very short lived so they never really achieved "Industry Standard" status like they could have.
"Add GHP Star Bar to KB's top 5. Greg Hill's 2-piece 0.065" wall debuted in '82 and beat S&M's legendary Slam Bar to the gate and trails by nearly a decade. It's important because Voris Dixon built both bars, and he built Greg's thick-walled, tight-radius flat, tall bar first. Now that BMX bars are on the Jenny Craig 13-butted mega diet, I share KB's concern about failure. And since when did BMX stems stop crushing the bar at the clamping area? Remember this problem? Good trip down memory lane, Kim..."

Today there's a ton of great bars out there mostly attributed to "rider owned" and operated companies learning from the past, it's mistakes & making the right decisions.
I guess what I'm getting at is when your going to make or buy a set of bars maybe think of which category they fit in and wether or not there's a chance you and one of your cables will find yourselves holding a severed bit of tubing at speed?
Posted by BCM at 10:14 AM

Email ThisBlogThis!Share to TwitterShare to FacebookShare to Pinterest
Labels: just my opinion

Good post. After I went thru my Haro Kneesaver and Hoffman Love Handle stage, all I rocked from then on was S&M slam bars. Love those things.

Hopefully these won't be seen on a bobber any time soon.
http://www.bertellibici.com/product.php?works_id=112

I used to rock the JMC bars. Remember those? The teardrop crossbar.

S&M slam bars rule. I have a NOS set of those sketchy Vector bars w/ the integrated stem in my stash of old bmx parts. Good post!


Those ply wood bars are beautiful but I have to assume they have to be like a skate deck and eventually give out. JMC Bars looked cool with that crossbar but didn't they have a lot of pull back and fought the crossbar pad?

I thought you were actually referring to the 1st rule.
that may very well be Ed I thought it was a funny google photo.

For the record I always hated the Love Handles and they never touched my personal bike. At the time I embarrassed we released such a ridiculous product, now I think it's funny. S&M Beringer bars on my bike at the moment.